Reflections on our church changing venues.

This post originally appeared on the Redhill Church blog. 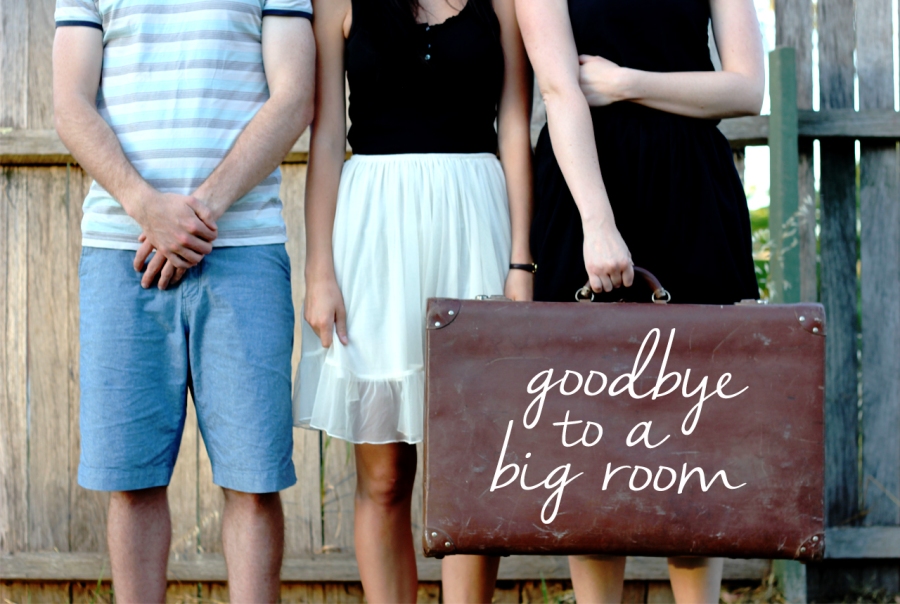 Our church is not a venue.

When Redhill started, some called us a ‘guerilla church’. We met somewhere different every week; in people’s lounge rooms, on top of Parliament House, in parks, in backyards, on the side of a hill. It was a great way to start a church. It helped cement the understanding that our church was a group of people rather than a building, and that in starting a church our primary task was to form a community rather than design a space. But the spaces we meet in are part of our church story. And soon we’ll be saying goodbye to the space that we’ve been meeting in for most of our story so far.

While meeting in different venues every week was fun, after a while we wanted to make it a little easier for people to find us. We started meeting in the then-canteen area of Canberra College on Tuesday nights. Weeknights were cheaper than weekends, and we weren’t going to be held down by the tradition of Sundays being ‘church day’, so why not? We met among old wooden picnic tables on hardened carpet, surrounded by ageing wall murals and the faint smell of sausage rolls. The harsh fluorescent school lights were a bit much of our arty sensibilities so we brought in little coloured stage lights and tried our best to create a bit of mood. 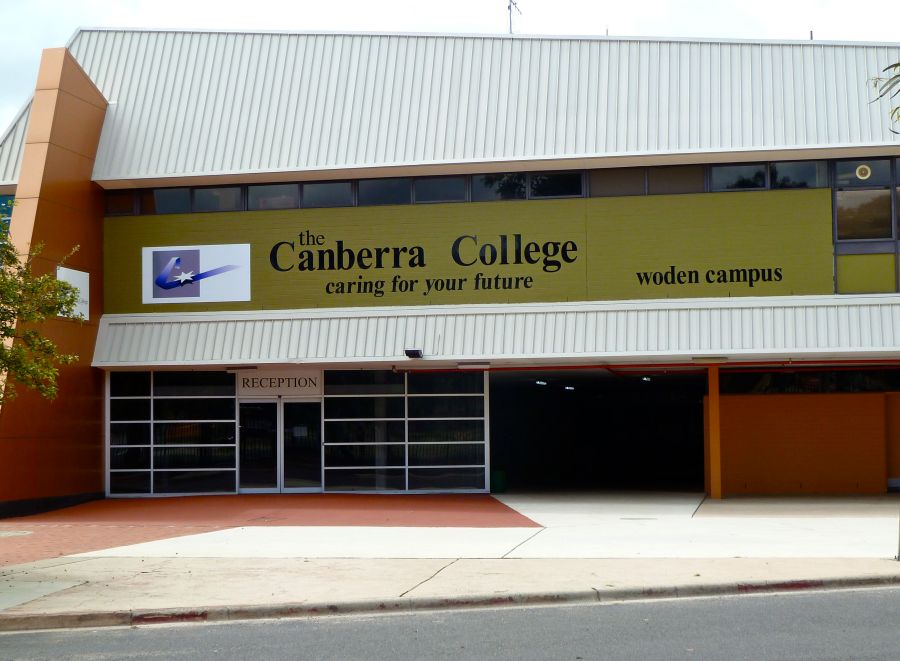 We left Canberra College for a year to meet in a nearby church building. It was a great space but weekday evenings started to get difficult, thanks to the arrival of babies and more people getting full time ‘proper’ jobs. If we wanted to meet on Sundays we needed a different venue, so back to the college we went. By now the canteen area had been remodelled and we were shifted to the ‘theatre’ as the college called it. We could call it a ‘theatre’ we suppose, in the same way we could call the person who drops the coffee pod into the machine a ‘barista’. In reality it was simply a big carpeted room, but it suited us just fine. We would meet in one half of the room and put partitions up to help our little group of twenty or so people feel a bit more cosy. Over time we tried different configurations to keep things fresh and try to draw people together. We tried in-the-round with the musicians in the middle, and in a horseshoe with the musicians standing among us. We faced this way and that, sitting on the floor and on chairs, and for a while we dragged out a couch each week to start the service with ‘couch time’. 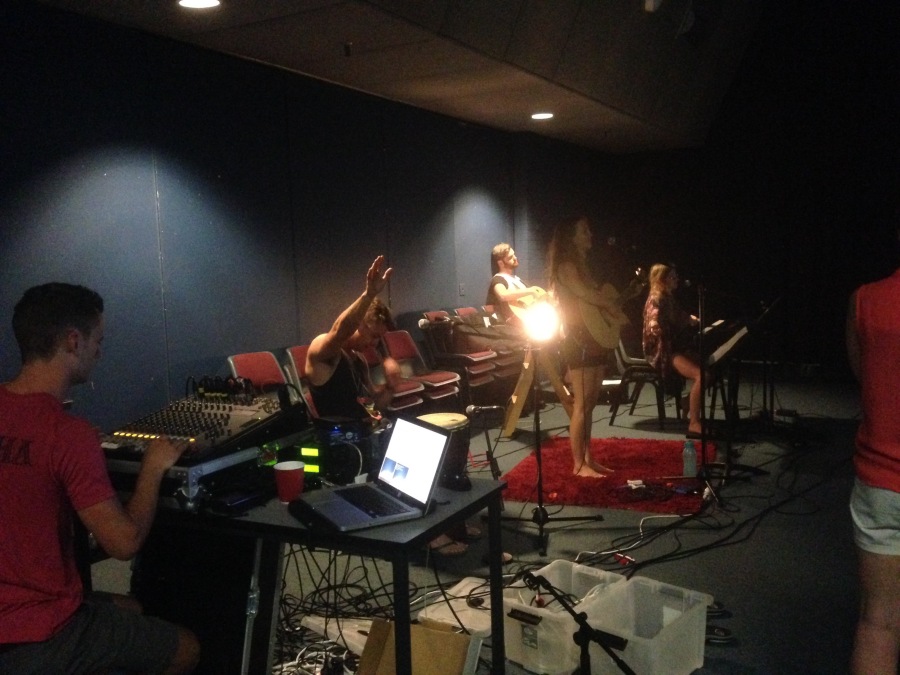 Sometimes we’d arrive to set up and the whole room would be full of chairs in rows, or set up with individual chairs and tables for exams. Many muscles were strengthened lifting and dragging and stacking, carving out space for us to gather in only to have to put it all back a couple of hours later. Occasionally we didn’t have time or permission to move things around, and we’d end up meeting in the first two rows of a vast assembly of chairs, the rest empty save for the kids tunnelling underneath them.

For most of our kids, the college will be the first church building that they’ll remember. To them, church is the people – of course – but also the cupboard with the red box of toys, the water machine with the button at just the right level for little arms, the large expanse of carpet to run around on, the big windows through which they’d watch their friends arriving and the weirdly shaped coloured stools in the canteen area that combine to make wonderful forts and trains. They will remember playing duck-duck-goose on the cold blue linoleum floor and hiding under the tables with computer cords hanging down everywhere (safety first, people, safety first). They may remember how one week, a spirited one year old nearly cut the power by yanking the master power cord out of the wall during the worship time, save for her mum diving across the chairs and in one swift motion pulling the child away and shoving the plug back in the socket. The music didn’t miss a beat.

Our church is more than this big room. But this room has hosted many moments. In this room we’ve cheered and whooped as we celebrated engagements, pregnancy announcements, job offers and other success stories. In this same space, the carpet has soaked up tears due to lost babies, heartbreaking diagnoses, the death of loved ones and many more smaller, quiet moments of grief. In this room we’ve cried out to God in both thanksgiving and petition. We’ve seen Him answer prayers in this room, and the walls have echoed stories of His faithfulness. We’ve also spent many moments in this space waiting, wondering, hoping, and have walked out to our cars with prayers still unanswered. In this room we’ve gathered around people to say goodbye, sending them off with prayers and encouraging words. Into this same space we’ve welcomed new faces, and held many ‘getting to know you’ conversations with strangers who’ve now become friends.

Through meeting in this space we came to meet Kev. Kev was the caretaker at the college and had the key to let us in every week. Over the years Brent and some of the others got to know him in little two minute conversations here and there, and came to love his rough larrikinism with obvious softness underneath. Though it was a pain to not have our own key, it was through these interactions that friendship with Kev became possible. When Kev and his partner decided to get married after two decades together, Brent had the privilege of officiating their wedding. And when Kev died of cancer earlier this year, our community grieved.

Our church is not a venue. If you ask us to describe our church you probably won’t hear about a colour scheme or ceiling height or the shape of our light fixtures. You’ll hopefully instead hear about a group of people who are trying their best to be partners in the gospel by loving and serving both God and each other. But the spaces we meet in are part of our story. And we look forward to sticking together as we turn to the next page. 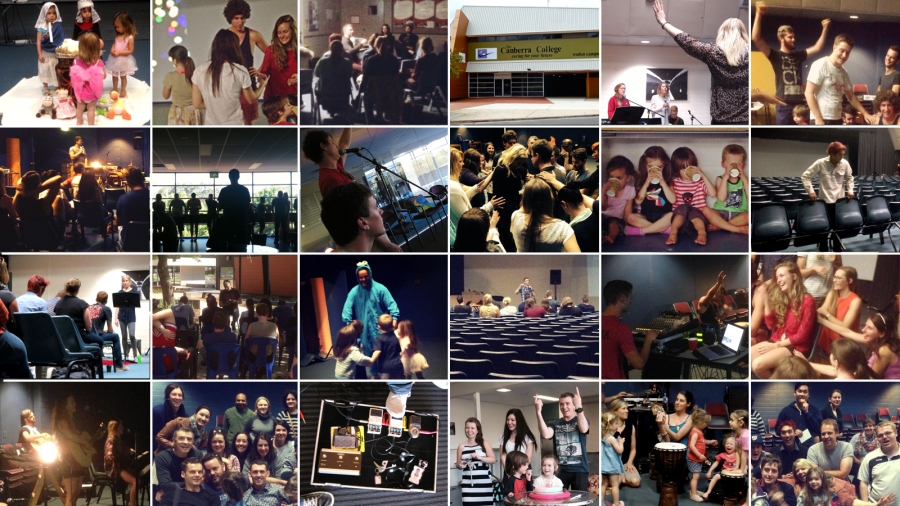